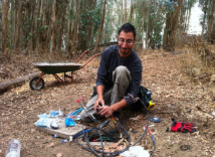 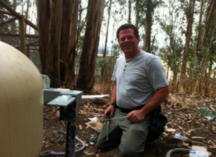 Our community spotlight this month is Major League Electric, owned and operated by Stacy Horton and his lovely daughter Shawna. During the summer of 2011 we received a phone call looking to place two raccoons in a permanent home. They had been raised by a family and released back into the wild, but unfortunately the family did not have the proper training in raccoon rehabilitation and the release was a failure. The raccoons were too tame and were repeatedly going up to people, as well as getting into cars and houses.We accepted the raccoons as permanent education animals. Since we would now have three raccoons housed in our education exhibit, we needed to expand and improve our current raccoon enclosure. We thought a pond would be a wonderful feature to add to the enclosure because raccoons love water.

We wanted a running creek fully equipped with a flowing waterfall, but to obtain this dream we would need electricity, and the raccoon enclosure was quite far away from the nearest electrical source. This meant we were going to have run a whole new line down to the area. We started calling around and were getting bids in the upper hundreds, which was very discouraging. This is where Stacy and Major League Electric come in.  We called them expecting to hear another bid in the high hundreds and instead we heard “free”! Stacy agreed to do all the labor for free, amazing!   Because of his generosity we were able to get electricity down 300 feet from its original source. Not only did he help us get electricity to the raccoons, but he also went the extra mile and brought electricity over to our developing otter pond clear on the other side of the property. Major League Electric was professional and efficient and a joy to work with.

We cannot express our gratitude for all the hours Stacy and his assistant Sohiel put in. As a tribute to Stacy and Major League Electric we named our newest education animal after him, Stacy the coyote. You can visit Stacy the coyote and see the running raccoon pond on a Saturday tour. Click here to learn more about our Saturday Tours.