“When I arrived at the marina, I simply was not prepared for what I saw.” 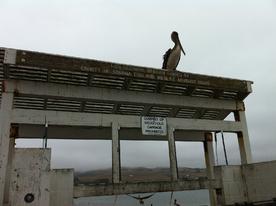 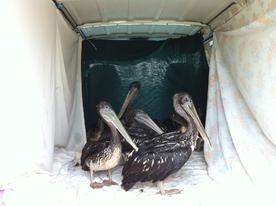 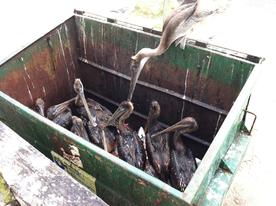 As executive director of one of the largest wildlife rehabilitation centers in Northern California, I know first-hand what a challenge it is to raise funds for the wildlife in need of human assistance.   In difficult financial times, it becomes even more of a challenge to raise the funds.  Once an animal is rescued and dropped off at a California Department of Fish and Game licensed wildlife center, the real challenge begins. The situation of juvenile brown pelicans visiting a fish cleaning station at Bodega Bay is a perfect example of a crisis arising for which no budget has been created, no fundraising or donations collected ahead of time.

On July 16th, the director of our Songbird Hospital was contacted by a park ranger at Doran Park who was concerned about an unusual number of juvenile brown pelicans gathered at the Westside Boat Launch at Bodega Bay.   The ranger reported several pelicans had been fed fish scraps by fishermen using the fish cleaning station and the scraps were lodged in the birds’ pouches.   He also reported that fishermen were complaining about the large numbers of pelicans surrounding them while they were trying to clean their fish.

When I took the call, I was in Geyserville conducting a follow-up visit on an osprey nest replacement that PG&E had helped us with the previous week.    Upon contacting the ranger, we learned there were at least two or three pelicans in immediate danger of choking to death.   With this information, I left Geyserville, stopped by our wildlife center in Petaluma to pick up two large kennels and headed to Bodega Bay.

When I arrived at the marina, I simply was not prepared for what I saw.  At least 30 juvenile pelicans were gathered around the fish cleaning station.   A fisherman was cleaning his catch and pelicans were moving in to try for scraps of fish.  They were being kicked out of the way by the fisherman!  As I approached to move the young birds out of the way, I heard a shuffling sound from a nearby dumpster.   Looking into the dumpster,  I was shocked to see a dozen pelicans covered in fish oil and observed a fisherman throwing garbage into the dumpster - right on top of the pelicans! I asked the fisherman to stop until I could get the birds out of the dumpster and to my dismay, my plea was completely ignored.

Since it was almost dark and I only had two kennels with me, I decided to remove the birds from the dumpster and then develop a plan to help the overall crisis at the cleaning station.  Fortunately, I was able to clean the material from the pouches of the pelicans that were choking and release the birds.  I  contacted International Bird Rescue Center (IRBC) in Fairfield and explained the situation.  They told us they could help, especially since there was a human interaction factor - this had turned into a wildlife nuisance issue with pelicans – a protected species - in danger.

The next morning, our Animal Care Director and I went back to Bodega Bay and filled our van with thirteen of the worst cases.  By now many of the birds had lost the ability to keep their feathers water-proof due to fish oil contamination. They could not fly and dive for their own food.  With their natural food source of sardines and anchovies extremely diminished, they were struggling even before they became contaminated at the cleaning station.

With the birds safely on their way to International Bird Rescue Center in Fairfield, I could not help thinking of how the situation would only get worse for these beautiful and elegant birds of the ocean.  I was also very concerned about how IRBC would manage to handle the huge financial burden:  these birds are in trouble all along the California Coast.


Public education is a vital component in maintaining a safe environment for humans and wildlife.  We were assisted in our efforts by our friends at WildRescue in Moss Landing who worked with Sonoma County Parks Department and US Fish and Wildlife Services to provide education to the public about the consequences of feeding pelicans at the cleaning station and how important it is to keep the dumpster lids closed.   We were also able to enlist the aid of two “pelican monitors” – local residents living near the marina - who provided quick and informative observations of the situation after we left the rescue site.

Once it was explained that the pelicans were only four month old babies and literally starving to death because of the shortage in their natural food supplies, the public felt more sympathetic towards the birds.  They also learned that salmon heads and other fish carcasses are not part of a pelican’s natural diet and would do harm to the young birds.

Staff and volunteers are stretched thin and it’s a daily struggle to keep up the proper care and feeding of animals admitted to wildlife centers.  The only way we keep our doors open to do this much needed work comes from donations from generous and caring members of our communities.  It always feels heroic and wonderful to rescue animals that need our help.  Once they’re dropped off at a wildlife center and the Good Samaritan who found the animal leaves to return home, the financial responsibility on the wildlife center increases quickly.   If you’re wondering, “Does my donation really matter?” – let me assure you – it matters GREATLY to us.  Every dollar helps and is deeply appreciated.  Most people don’t even realize we are non-profits.  We’re NOT funded by a government agency.  We depend entirely on our generous community donors for support.   If you’re an animal lover, donating to your favorite wildlife charity is a wonderful way to help. 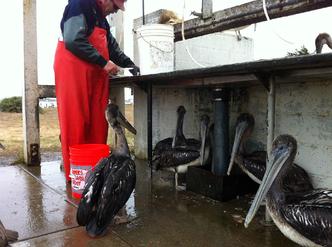