The wrist was crushed and deformed by the trap 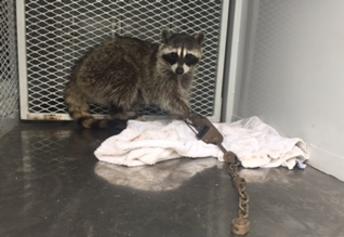 Euthanasia always pulls heavy at our hearts. This is the reality of illegal trapping.

The Reality of Illegal Trapping
By Doris Duncan

On April 24th, we received a call from Officer Justin with Sonoma County Animal Services about a raccoon that they had picked up by Nordyke Road in Santa Rosa which was in need of our help. The raccoon had been caught in a leg hold trap, which it dragged along with it through a neighborhood and eventually became entangled in a fence in someone’s backyard.

When I approached the kennel where the raccoon was resting after its rescue that morning, I could immediately see that the trap was an illegal one, and possibly a newer model than those we have seen before. The raccoon was frightened and dragging the heavy trap as she moved away from me.

I brought the raccoon back to our wildlife hospital to remove the trap. Many people have a misconception that removing these traps is easy and once done, the animal can be set free again. Unfortunately, this is far from the truth. It took multiple people to assist with this raccoon. We had to hold her still, while pushing all of our weight down on the trap to release the steel mechanism inside the trap that was crushing her paw. Often these traps are baited with an alluring treat that the animal can smell but cannot get to, unless they put their whole paw inside the trap to retrieve it. This is when they are seriously injured and immobilized, as a spring releases a crushing steel ring on the animal’s paw.

Once the paw was freed, it was immediately evident that the raccoon’s suffering extended further than we thought. The wrist was crushed and the muscle and skin was deformed by the trap. These injuries likely occurred as she panicked and flung her body and weight around while trying to free herself of the excruciatingly painful trap. Her abdomen and back legs had raw sores consistent with dragging herself a long distance while being weighed down. Her teats were full and lactating, suggesting that the suffering extended beyond this individual and that somewhere unknown to us, her kits would be left to slowly starve to death.

During our exam of this injured raccoon, it became very clear that the paw was beyond any kind of professional treatment. Being that raccoons depend the most on both of their front paws to survive, and taking into consideration the severe injuries to her abdomen and back legs, we had no choice but to euthanize her. The thought of her kits slowly dying without her care weighed heavily upon all of us.

These cases are always hard. It is often the case in trapping situations that the story does not end well for the animal involved. Many people who plan to use any kind of trap, think that they are making a humane choice for the animal, while trying to solve their nuisance wildlife issue.

Two of the main reasons wildlife are trapped and subject to cruel and outdated exclusion techniques are: suspected depredation of livestock and taking up residence in or near a human dwelling. Sonoma County Wildlife Rescue has spent the last 20 years focused on these kinds of conflict resolution efforts between wildlife and humans.

During our years of case studies, trial and error and knowing each species of wildlife in a professional rehabilitation setting we have learned a lot. Indeed we have become one of the leaders in “wildlife friendly’ techniques that provide a solution to these conflicts involving wildlife and humans. We believe that we really can peacefully co-exist together.

To find out more about any wildlife conflict issues, contact us through A Wildlife Exclusion Service (AWES) that specializes in nuisance wildlife that may be living in or near your home or business. For issues with livestock or pets and wildlife conflict, contact us through our newly developed Predator Exclusion Education Program (PEEP) which specializes in “wildlife friendly” techniques.

Once you contact us, you will quickly find that we are a valuable resource that is reliable, professional and honest. You will be delighted to know that by contacting us and using our services, you are supporting a local non-profit that relies on its community to keep our doors open for providing care to sick, injured and orphaned wildlife. 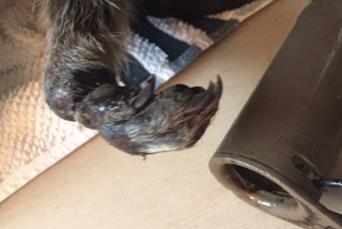 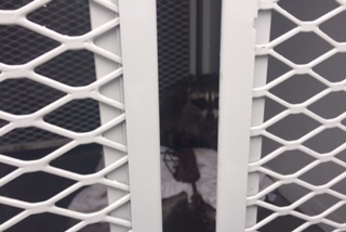 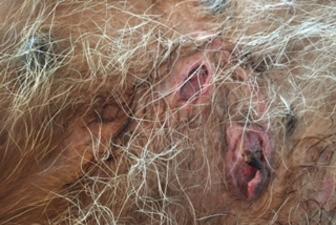 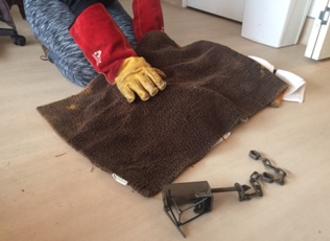 Sores from dragging herself through neighborhoods

The raccoon as we approached the kennel

The heavy trap was dragging from the raccoon's leg