ONE YEAR ANNIVERSARY OF TRACKING COYOTE IN WILDLIFE HOTLINE

May 5, 2020 marked the one-year anniversary of Sonoma County Wildlife Rescue tracking and monitoring the coyote with an injured rear leg often found in the area of Airport Blvd. in northern Santa Rosa. This marks the longest time Sonoma County Wildlife Rescue has tracked an animal through our Wildlife Hotline. As noted in a previous statement, numerous attempts to bring the coyote into care at our wildlife center were unfruitful. Coyotes are often extremely difficult to trap and capture when they are physically fit and able to move on their own. Though this coyote has a limp stemming from a previous injury to its right rear leg, it is still able to ambulate quickly when approached and has avoided all attempts at trapping. Through our own observations and with the help of our wildlife hotline logs, it has been determined by our animal care team, as well as outside wildlife resources, that this coyote is able to survive on it’s own in the wild but rather stays in the area due to members of the public feeding it.

Currently, we continue to receive several calls and emails a week regarding this coyote. When available, we ask for the caller to send in a photo or video of the coyote that is then uploaded into our hotline log. We use this information to check for changes in the health and conditioning of the coyote. The most recent photo of the coyote was received on May 30th. Looking at the coyote, our animal care team determined that the coyote is overweight but otherwise appears to be healthy.

In March 2020, SCWR distributed signage throughout area that the coyote is known to be fed by members of the public. Photos of the signage were posted in a previous update. After posting this signage, we noticed through documented calls in the hotline log, the coyote has been frequently visiting another area nearby and we were able to use this information relocate a portion of our signage in late April 2020.

While the coyote’s health and body condition has not changed significantly since we initially began tracking it in May 2019, its comfort around humans is trending in a dangerous direction. UNDER NO CIRCUMSTANCES SHOULD YOU BE FEEDING OR APPROACHING THIS ANIMAL. THIS WILL RESULT IN THE ANIMAL BEING EUTHANIZED BY WILDLIFE AUTHORITIES.

*Please note that if you sent an email through our website from May 1, 2020 though May 31, 2020, we have received your email and documented the contents in our wildlife hotline. 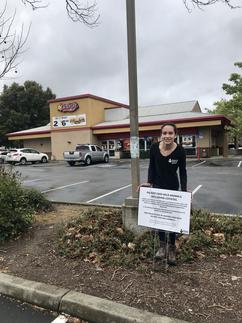 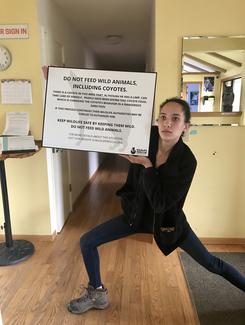 Sonoma County Wildlife Rescue has received several calls a week beginning in May 2019 regarding a coyote with an injured rear leg often found in the area of Airport Boulevard and Aviation Boulevard. Sonoma County Wildlife Rescue has tried every method at our disposal to bring the coyote into care including several methods of capture and one month of attempted trapping with staff and volunteers checking the trap every 6 hours.

At this time, the coyote has become extremely habituated to the public due to the fact that several of the people who come in contact with the coyote are feeding it. Most recently, we were advised of an event where a member of the public was attempting to hand feed the coyote. UNDER NO CIRCUMSTANCES SHOULD YOU BE FEEDING THIS ANIMAL. THIS WILL RESULT IN THE ANIMAL BEING EUTHANIZED. THIS ANIMAL IS ABLE TO CARE FOR ITSELF.

Currently, we are reaching out to other wildlife experts in the area to come up with a plan for this animal. If you would like updates on this coyote please click here to fill out the “contact us” form and we will update you if we have any new information regarding this coyote. 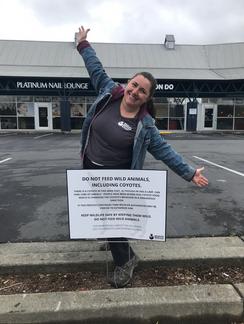 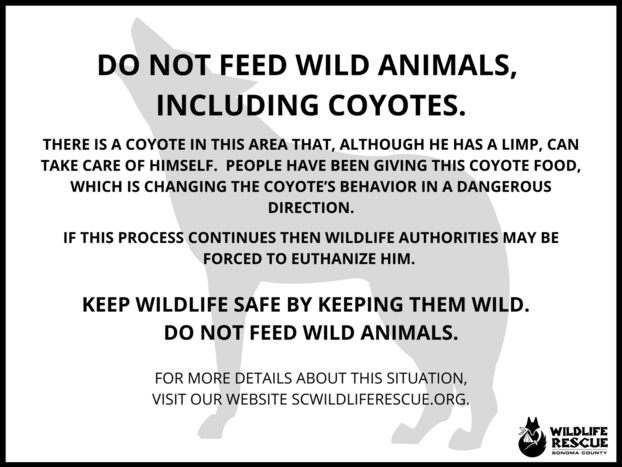