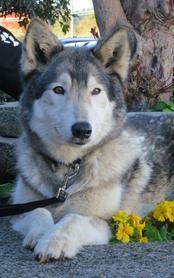 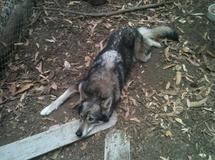 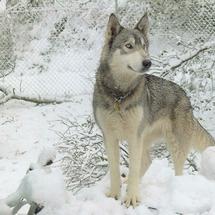 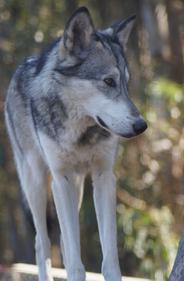 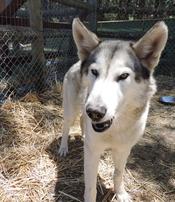 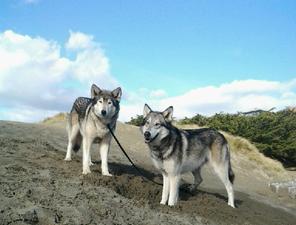 SCWR in the Local News

We would like to introduce Willy and Cheyenne to you. The wolfdogs are part of our Education Outreach Exhibit, which is open for public tours on Saturdays at 2pm. Both of these beautiful and intelligent animals were rescued by SCWR after being slated for euthanasia.

Willy arrived in October of 2012 at just under two years old.  He had been purchased as a puppy for a rather large sum of money from a wolf-hybrid breeder in Tehachapi,California. His owner, who lived in Marin County, loved wolves. He wanted to have a dog that was just like a wolf since it is illegal in the State of California to own an actual wolf. He later confessed that he had made a big mistake and wished he would have done more research before diving into such a commitment. Although Willy's owner loved him very much and wanted the best for him, Willy became increasingly problematic and unhappy.

He was first kept in the house and began tearing up furniture, curtains, and anything else that he could get a hold of, and he was constantly pacing.  By the time we were made aware of the wolf hybrid his owner had a new baby and Willy had moved outside to a backyard with cement and high fences which he could not see out of. Wolves are highly visual animals and Willy was starting to become bored. He learned how to escape, chewing through wooden fences and digging his way out of the yard. At a great expense, his owner installed a cement foundation to prevent escape but Willy still found ways to get out. After two years of frustration, Willy’s owner found a friend to take him. He soon escaped and ended up in the San Bernardino Animal Shelter where he was scheduled to be euthanized. Luckily he was micro-chipped and authorities were able to contact his original owner who went to go pick him up. In desperation, the owner contacted the Marin Humane Society to ask for help.

They in turn contacted the Sonoma County Animal Care and Control, where Officer Shirley Zindler then contacted us. After a series of interviews and observations with Willy and his owner, we decided to rescue him. He was a perfect partner for Shela, our first wolfdog, who was happy to have the company. They were both spayed and neutered to prevent any “accidents.”

The owner and his family contributed a generous donation to improve the enclosure where Shela was living. At that time, we decided it would be a great benefit to our community to include both of these amazing animals in our Education Outreach Exhibit. They have been a good addition to our team to educate and convince well-meaning people that wildlife do not make good pets.

When Shela developed cancer and passed away in 2015, Willy was distraught. He spent several weeks howling often, missing his friend. We  worked with Lake Tahoe wolf rescue to try and find him a new companion. Finally in Spring of 2016, we found Cheyenne.  Cheyenne is a low content wolfdog who did not work out as a pet. However, she loves being an educational ambassador and watching the humans on tours go past her enclosure. Willy and her are close friends and while Willy has decided he is definitely top dog, he shares the sunny sleeping spots and toys well. Not all wolfdogs are this lucky.

As a wildlife rehabilitation center, we have personally seen many tragic mistakes where wildlife were kept as pets and then had to be euthanized for a variety of reasons. To name just a few: wildlife often become very aggressive once the reach sexual maturity and can be extremely dangerous, they are fed the wrong diets which result in metabolic bone issues and other developmental problems, they are kept in cages that are too small which cause extreme depression, and they cannot fend for themselves in the wild once they have been tamed or imprinted.

Our first sucessful education wolfdog was Shela. Shela came to us in 2005 when she was just over two years old. We had her for twelve more years. She died in December 2015 from cancer, after living out a long life as a wonderful education outreach ambassador. Her story follows.

The Visalia Animal Shelter contacted us because we had assisted them in a coyote rescue. They called to ask us if we could take a “wolf” that had escaped from someone in their town. Shela had been roaming the town for more than two weeks and authorities were unable to capture her. Finally, close to starvation Shela entered a baited trap and was caught and brought to the animal shelter. Employees and volunteers of the shelter took pity on Shela and instead of immediately euthanizing her, began to search for suitable placement.

We were sent pictures and agreed to take her, figuring we might be able to get her socialized and adopted at one of our local shelters as a husky-mix. One of the kind volunteers at the Visalia Animal Shelter agreed to drive her the five hours to Sonoma County only hours before she was scheduled to be euthanized. We were not prepared for the extremely thin and terrified animal we were presented with when she arrived. She was loaded from nose to tail with fleas and ticks because no one at the shelter could get near her for treatment. She would tremble, shake, poop and pee anytime anyone went towards her. Any sudden sound would send her jumping for cover.

We were told by the local shelters that she was too “wolf-like” and because of her appearance and behavior she was unadoptable. We began to search for a wolf rescue or wolf-hybrid rescue to take her. After many attempts with no luck of finding a suitable place that was not already full, we decided to keep her. She had bonded with me and would not go near anyone else. She finally felt safe. It took many years of constant loving care to get her to feel secure with us, settle in, and feel comfortable around other people.
We tried to help two other wolf-hybrids in the past that did not work out here at Sonoma County Wildlife Rescue. Both of these animals had similar stories to Shela and Willy.

Kya, a young female came to us from Oregon. She was constantly trying to escape and did not get along with Shela. A local Sled Dog Rescue tried to help her, but had the same problems we did. She is now on display at the Fulton Zoo in their wolf-hybrid exhibit.

Lady was an older female and after much work and many futile attempts of socializing with Shela, it did not work out and she was adopted by one of our past employees who has years of experience working with wildlife. She is quite happy with her new owner and we are grateful to have found a qualified home for her.